A limited quantity is available. We are expecting to receive a new shipment early next week. Your order may be delayed. We apologize for any inconvenience.

Yunnan Baiyao Capsules is also known as Yunnan Baiyao Jiaonang (YNBY). Yunnan Baiyao is a traditional Chinese formula help stop bleeding and promote healing from external wounds or internal injuries.* The product is now used worldwide by humans as well as for animals. Yunnan Baiyao is made from precious herbal materials indigenous to Yunnan. The exact ingredients and production procedure of Yunnan Baiyao are still state secrets of China. It is believed that the main Chinese herb is San Qi, or called Tien Chi, also known as Panax pseudoginseng, Panax notoginseng, or Notoginseng. 90 years of herbal practice has shown its legendary benefits. The product has won the Chinese National Gold Medal for its high quality in 1979, 1984 and 1989. Recent clinical studies have also outlined Yunnan Baiyao's effectiveness. You can read about the research at Memorial Sloan Kettering Cancer Center.

Directions: Take 1-2 capsules each time, up to 4 times a day.

There's 1 red pill in each box. There's a small indented circle in the middle of the packet. Press from the back and the red pill will appear. The red pill is known as the "safety pill". The usual procedure is to take the red pill along with the first dose of Yunnan Baiyao if there is a severe condition.*

1. Avoid broad bean, fish, and sour, cold food within one day after administration.

2. Be sure to clean the wound surface before external use.

3. Veterinary use for your beloved dog, cat or horse, follow your doctor’s supervision and recommendation on dosage.

*Please note: these statements have not been evaluated by the FDA. This product is not intended to diagnose, treat, cure or prevent any disease. This product cannot replace your doctor’s prescription medicine.

I hoping they are helping my dog who has a tumor on her spleen. this is my second order. so far so good.

New Green Nutrition provides fast, efficient service; and maintains consistent contact with status update emails. My 7 year old fur-baby (Sunny) has been taking Yunnan Baiyao since 03.13.20 when she was diagnosed with HSA (hemangiosarcoma) and had to undergo an emergency splenectomy. This product was recommended by our vet and oncologist (as it has evidence based studies and results fighting HSA) and it is essential for Sunny's daily maintenance. I can count on New Green Nutrition to quickly ship the product and I highly recommend them! 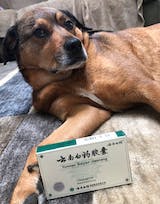 K
K.P.
Always, fast, always exactly as promised, and a literal life-saving supplement for my dog

This product is for my dog... he's 13.5 and has hemangiosarcoma (it's as bad as it sounds, yes). Almost eight months ago, the surgeon told me to take him home, let him say his goodbyes, and then bring him back on Monday and they would euthanize him. He was in no pain, still playful, sleeping like a baby, and loving his meals, so I called on Monday and told her that I would not be euthanizing him that day... not until he was in distress or pain. She said, "That's perfectly fine. I think that's great, and here are some scrips that will help him... in addition, I would suggest a Chinese herbal supplement called Yunnan Baiyao. I don't typically recommend herbal medications, but this particular one has some legitimate medical literature and history that supports its benefit as a clotting agent, which will be helpful in your dog's case." Again, that was almost 8 months ago, and when we were at the vet last month for something unrelated to his cancer, that same surgeon said, "I believe the reason he's still here, and STILL LIVING A QUALITY, PAIN FREE life, is mostly due to the Yunnan Baiyao." She told me that in all her years as a veterinarian surgeon she had seen only one dog live 6 months with the cancer that my dog has, and the other dog's quality of life wasn't nearly what my dog's still is. She also said there is no medical reason for the dog to still be doing as well as he is. This supplement has been a godsend for my dog, and for me by extension, because this dog is my whole heart. My dog wasn't yet 13 when he was diagnosed, and we live day to day now, but our original, post-diagnosis goal was to get to 13, and we did that. Our next goal was to get to 13.5, and we've now done that. Our next goal is to get to 14, and not just get there, but get there with a pain-free, happy, playful existence full of car rides, food, walks, and hugs. I believe that my dog is alive because it's simply not his time to die yet. God has not called him just yet. I also believe, as does the doctor, that Yunnan Baiyao is assisting in my dog's continued blessing. So, from the bottom of my heart, thank you God, and thank you to this amazing herbal supplement. I would HEARTILY recommend it to anyone who's desperate for some chance, any small chance, to help their dog live a longer, PAIN FREE existence after the hemangiosarcoma diagnosis. I'm not AT ALL a big believer in things like turmeric curing viruses or cannabis curing cancers. I realize that Yunnan Baiyao falls into a similar category... but it's absolutely been a critical component to my dog's standard of care and quality of life while he's fighting this disease, and that's not just my opinion, that's the opinion of a multi-decade veterinarian surgeon with VCA. Bottom line? If you're in the same position my dog and I found ourselves in 8 months ago, and you'll try anything to give your dog every chance at a quality, pain free existence, Yunnan Baiyao is a relatively inexpensive addition to the prescription medications, and something that, at least in my personal experience, is nothing short of a wonder drug.

So...since the awful diagnosis received in March (cancer), my dog has basically returned back to a more normal life...thanks to Yunnan Baiyao, and this company for fast delivery!!!